This week’s post takes a look at how the network and applications layers of a three tiered Blockchain ecosystem might interact.

For more on the three tier view of life, see the last post.

In all the experimenting that is being done, there is a risk of RTW, re-inventing the wheel and FTLFH, failing to learn from history.

If the industry is to evolve and reduce its costs, then there are a couple of operational pitfalls which I think those involved in the dialogue need to be very aware of. Many of those involved will be very smart subject-matter-experts (SME’s) with a huge in depth understanding of their particular product. That narrow expertise needs to be supplemented with a large dose of front-to-back, generalist expertise that understands how the operations part of a bank, the plumbing, really works.

Let’s take a look at some potential structures to illustrate the point. Let’s assume that we can represent the front-to-back process as three blocks: Trade Execution, Settlement and Payment. The latter two would be different for a securities trade, for FX there would be Payment and Payment or Payment vs. Payment for some trades. For derivatives trades there might only be a payment. Sticking with securities, here is how this might play out. Let’s use the Swiss equity market for illustrative purposes and assume investors buy Swiss shares vs. Swiss Francs.

In this approach, everything is on one platform. That might work for trading and for the settlement,  if the market is willing to have only one place to trade and settle Swiss equities. Today this is certainly not true of trading, which can take place on numerous platforms, nor is it true of settlement which can be domestic, via SIX Securities, or international, via Euroclear or Clearstream. But, in theory at least, the market could agree to use only one location. Now, we need to think about the final link in the chain, Cash or Money. 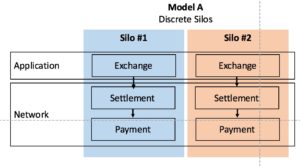 If the money balance in Model A is discrete from any other balance, then there has to be a method of moving cash on to the platform. This will need to work in real time and it will necessitate somebody performing a transformation or exchange function in order to move Swiss Francs into and out of this platform.

The banks have this problem in spades today; virtually every single bank has multiple Nostros in each currency and has to thoughtfully juggle funds between these multiple buckets. This is at best an imperfect science.

Regulators will take a very close look at the money side of such a set up. Who is taking deposits in this situation, are there end of day balances, is the platform operator offering and able to translate balances on this digital platform to real Swiss francs? This was, by the way, one of the underlying ills in the Madoff scam; the assets represented by the fund units did not actually exist.

Conclusion: With Model A it is very unlikely that there is a single monopoly front-to-back stack. If that is not the case and there are “Heinz 57 Varieties” of stacks, then the operational effort to move securities and, or cash positions between them will be a significant burden for operations. The Blockchain is going to be hard pushed to deliver a quantum leap in either efficiency or effectiveness.

Model B –  trading and settlement as one stack, cash separate

This is an advance on Model A. It would allow cash to be separate. This would enable the cash platform, or “rail” to use the jargon du jour, to serve  multiple purposes. Combining trading and settlement might just work if all the participants in the Swiss equity market agree to a one-size-fits-all approach. Regulators would also have to be comfortable with the monopoly offering. 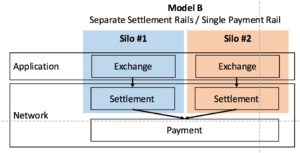 The next test would be whether the model would hold up if other asset classes wanted to use the settlement part of the chain. The equity repo market for example would be very active; this would need to draw on the same pool of securities being used on the new Trading Platform. Transformation to move the holdings form Platform A to Platform B would be possible, but will suffer the same challenges as there are to move cash  between two locations.

Conclusion: The securities settlement part of the chain is best centralised into one location, the CSD rail for the currency. Whilst separation at a product level, for example between bonds and equities, might easily be done, any platform would need to ensure that all related functions, such as repo or stock loan are on the same rails.

This would give the maximum flexibility. There might be several trading rails feeding through to a small number of settlement rails and one cash rail per currency.

To my mind a structure that looks like Model C is what is required. Those who have some insight into the Swiss Value Chain would at this point jump and down and do an impression of the ad for those herbal sweets called Ricola: “Who invented it? The Swiss”. And a very well thought out platform it is too; executions are fed to the settlement platform, which in turns draws on cash provided by the RTGS system, SIC. 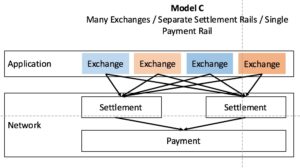 So, why do we need the Blockchain?

The “R word”: Reconciliations. Checking that what is in system A is also in system B is the staple diet of back-office staff the world over. Today, operations has to check that what is in the trading system is what was executed externally and that those same trades have been passed on for settlement. Then there is reconciling of the securities holdings: “Our books show we own 10’00 share UBS N, does the statement from the CSD say the same?” Then there is a very similar reconciliation effort to check the bank account, the Nostro. Blockchain eliminates that task. Your books represent part of the network and you can rely on them.

Modern Platform: If a CSD has an end-of-life platform, then Blockchain is the latest and greatest. There is a huge obstacle to overcome here which is that market infrastructures are generally wary of being bleeding edge. This was a factor in CLS Bank choosing IBM and its operating system for its core platform, rather than Unix, which at the time was the new, new thing. The Australian market recently announced it would use the Blockchain for its redesigned CHESS platform. In the US, the DTCC is experimenting with repo transactions.

Unbundling: in today’s markets, it is typically a local market player which offers custody services. In Switzerland, this means UBS or Credit Suisse, with BNP Paribas and even the CSD, SIX offering a service. CS’s clients will largely be foreign banks.

Today those banks buy a bundled service from CS and its competitors: settlement and liquidity. CS sorts out both the securities side and the money side. Historically those settlement fees would get cheaper each year; “the same for less or more for the same” was the expectation.

As part of the service, banks were ready to offer clients very large intraday overdraft facilities, without explicitly charging for them. Now those overdrafts, which might be the result of securities or payments activity, are driving how the Treasurers are allocating costs to the various business lines.

With the Blockchain comes the potential to emulate this Remote Membership and to speed up the Payment part of the process; market participants could do a trade to raise liquidity and see the resulting proceeds arrive in their bank account in an instant.

Blockchain enables the custodian and Nostro service to be unbundled; the transaction part can be separated from the liquidity part. That will suit some players, but not everybody. Some may want buy a traditional service. South Africa’s FirstRand might take the view that they have enough GBP activity to sort themselves out, but in Switzerland they may want to buy a service from UBS, because they want to just “fire and forget”.

Lessons Learned: Let us accept the view that the Blockchain platform will likely be a three tiered world and that there is a common protocol at its base.

#1: Applications will be the visible success of what gets built on the Blockchain

#2: For applications to flourish, we will need a very robust answer to the network tier.

A silo approach has worked really well for Apple; initially they controlled the protocol in the form of the iPod, the network in the form of the iTunes Store and the applications in terms of the content of the store. Eventually, they opened up to an other platform; Windows.

Financial services will not increase either in efficiency or effectiveness if the network parts are mutually exclusive. To compare to Apple; we need to be able to buy that new U2 album and then sell it on.

#3 Successful use of the Blockchain is going to be driven by the network; how well the market can facilitate the exchange of securities and money, payment or payments vs. payment.

How to do Operations in an Investment Bank, or not! Includes many of the Blog Posts, with the benefit of context and detailed explanations of the issues. True stories about where things go wrong in the world of banking. Available in hard copy only.

An up to date view of the latest issues and how BCBS guidance that comes into force from Jan 1 2015 will affect this area of banking. Kindle and hard copy.

Thanks for your support.

Optimistic. With 2020 now behind us, that word sums my Bankers’ Plumber’s view of what is ahead of us in
END_OF_DOCUMENT_TOKEN_TO_BE_REPLACED