Unintended consequences and the potential for a MAD outcome; Mutually Assured Destruction. Whilst this week’s post is not about the arms race, it is about how banks are arming themselves.  From previous posts, readers will be aware that banks are now having to be proactive around Intra-day Liquidity and  the national regulations coming as a result of BCBS 248. The obvious steps are ones that show immediate results yet do not help to solve the fundamental issue around liquidity and may lead to a Mexican stand-off.

A complete solution for Intra-day Liquidity monitoring requires a bank to be able to deal with both the reporting requirements and the operating principals. Let’s use an example to illustrate a before and after picture

Before we all cared about Intraday Liquidity Management

Credit Suisse is a member  of the Swiss payments system, SIC. It  has some sort of queue management system which allows them to control when payments are sent to the SIC. As a rule, their clients, aka correspondents, will simply send payments to them on value date-1: “Here are 100 CHF payments for value date tomorrow, please make them.”

Credit Suisse has the discretion when on value date to make them. Exactly how payments move through the system will be a function of the credit limits it gives its clients (B) and the rules it has to follow as a member of the Payment System (C).  For a client bank, if they had modelled their balance intra-day, it might well look a J-curve; things get overdrawn before they head back to zero. 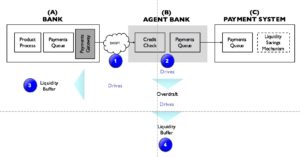 Now that the banks all care about Intraday Liquidity Management

Among the many clients of Credit Suisse is a US based IB. “Abend Livingstone (AL)”,  that has studied the new regulations. They take what our American cousins call a hawkish view. They want nothing to do with overdrafts and have determined that they will now only send a payment when they have funds.

So, AL asks Credit Suisse to set them up with the new trendy diet and feed them MT900 and MT910 intraday status messages. Inside their own Ivory Tower, the wizards at AL re-configure their systems to consume this diet of new SWIFT messages and then release payments if, as and when they have a credit balance.

It works and AL is never overdrawn. No credit taken equals no need to have an intraday liquidity buffer, or at least not a very large one. High fives all round, medals on chest from the head of operations at AL, General Oliver North II. And bonuses for all.

Why this is not sustainable

The approach described above is a real one. The IB in the example above has been using it for some two or three years. If challenged, they would say that they are following  operating principal 5 of 6 in the BCBS guidelines:

Now that the UK regulator, the PRA, is focussing on BCBS 248, other banks are now using the same routine; throttling or queuing payments based on actual events in the real world. Individually this trick or hack is being employed successfully. From a systemic viewpoint though, this is like crime in multi-storey car parks. Wrong on so many levels:

Gridlock or a Mexican stand-off; the tactics have worked so far. For the few. This is simply a first mover advantage. If everybody does this, nothing moves.

Free-rider: those who refuse to use their overdraft are refusing to make liquidity available. This is not acting with integrity. It is not a new phenomenon; payments systems have had to deal with the same thing and addressed it with rules requiring members to meet periodic intraday throughput targets for volume & value. Some may also have price incentives; SIC for example, charges CHF 0.01 or so at the start of the payments day and up to CHF 3.00 at the end.

Credit Suisse is subject to the rules of the SIC system. Almost certainly, they do not pass on these throughput rules to their clients, nor do they have variable ticket fees based on when the payment was received. If this throttling approach were to become very widespread, then eventually CS might simply fall afoul of the local regulations and then, realise the problem is of their clients’ making. Maybe.

Systemic risk: there are multiple points in the chain where things could go wrong. Credit Suisse might take some time to apply the credits to their clients’ accounts. It might take a while for CS to generate outbound SWIFT messages, there might be some sort of delay in routing those messages inside AL, or once they have decided to make a payment, that has to wind its way back to through the AML filer, out to SWIFT, in to CS, through the credit check, and then finally out into the payments system.

Last minute approach: Now the more thoughtful of those banks which have implemented some form of payments throttling may have built in a safeguard to make sure things are not totally last minute. They will have a cut-off point at which they release all the remaining payments. If AL is unlucky, that “mass release” could actually spike their overdraft, which in turn will drive their liquidity buffer calculations.

Lessons Learned: Fight causes not symptoms. The underlying problem here is that there are too many gross payments moving in the real world. To move that volume and value the payments ecosystem has adapted based on intraday overdrafts for clients and some rules for the payments system. Those intraday overdrafts are now firmly under the BCBS 248 microscope. The Nostros are affected by credit given and their clients are affected by credit taken.

Very fortunately for all concerned, CLS Bank is in place to do a fine job of offering net funding for the USD 2.5 Trillion per day in FX trades that pass through its machinery. It is vital to understand that CLS succeeds and has wide participation because it offers three key benefits:

Banking has high costs. An increasingly large part of those high costs is driven by the Intraday Liquidity Buffer. That cost can be reduced across the board if the industry has the means to stop making  so many gross money movements. That requires some cooperation.

How to do Operations in an Investment Bank, or not! Includes many of the Blog Posts, with the benefit of context and detailed explanations of the issues. True stories about where things go wrong in the world of banking. Available in hard copy only.

An up to date view of the latest issues and how BCBS guidance that comes into force from Jan 1 2015 will affect this area of banking. Kindle and hard copy.

Thanks for your support and thanks to the numerous contributors.

Optimistic. With 2020 now behind us, that word sums my Bankers’ Plumber’s view of what is ahead of us in
END_OF_DOCUMENT_TOKEN_TO_BE_REPLACED